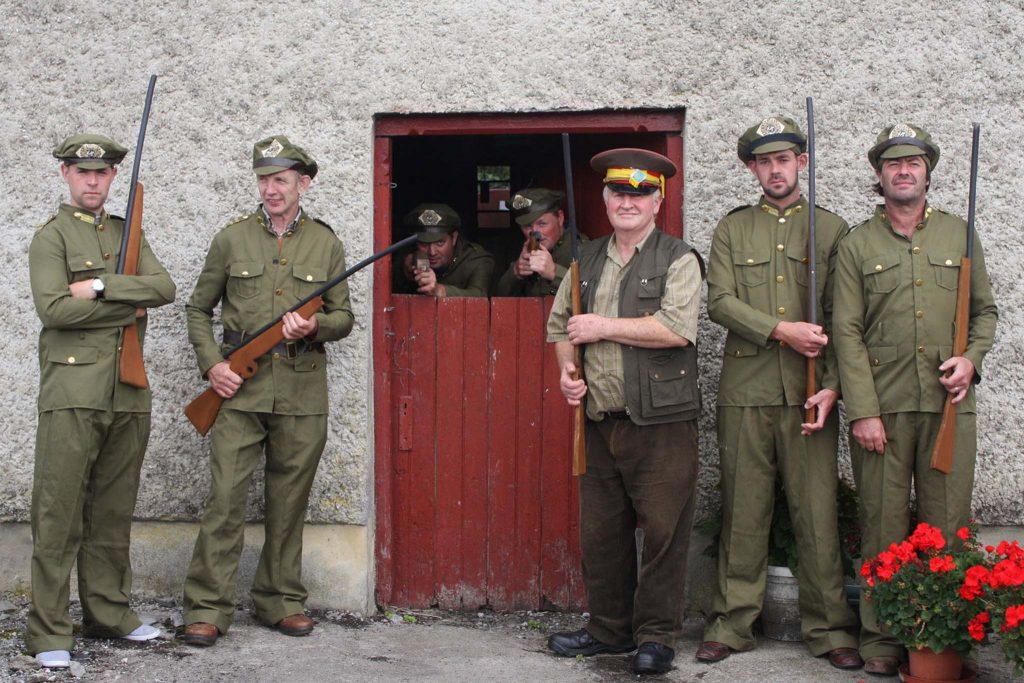 The upcoming Dualla Show will feature the people of Moyglass performing a re-enactment of the 1916 rising with their impressive GPO float. It takes the form of a four-part playlet. The first act features the reading of the proclamation by Padraig Pearse. The second act involves two Moore St. women being stopped by British soldiers. The dramatic third act sees the the storming of the GPO by British troops. The final act has Padraig Pearse surrender to General Lowe.

The people of Moyglass formed a committee in early 2016 to create ideas to commemorate our patriots who died in 1916. Four proposals were adopted, namely, a memorial to be erected in Moyglass village, a float to be built for St. Patrick’s Day Parade in Cashel, a playlet to be staged at later events and a re-enactment to be carried out on a vintage day at the end of July and other events throughout the year.

A plaque was commissioned from Louise Carroll Designs and following a design process , the order was placed. The site was agreed and the the 15th of March was chosen as unveiling day. This date was very apt as it coincided with National Proclamation Day in the schools throughout Ireland. We asked Moyglass National School to join with us in the unveiling of the memorial. We wish to thank the school for embracing the occasion and having the children on board will form a link to the next commemoration in fifty years from now. When the plaque arrived, we were very impressed with its quality and decided that it deserved to be enhanced with a cut stone surround. We are grateful to all who gave donations of money, materials and their time. 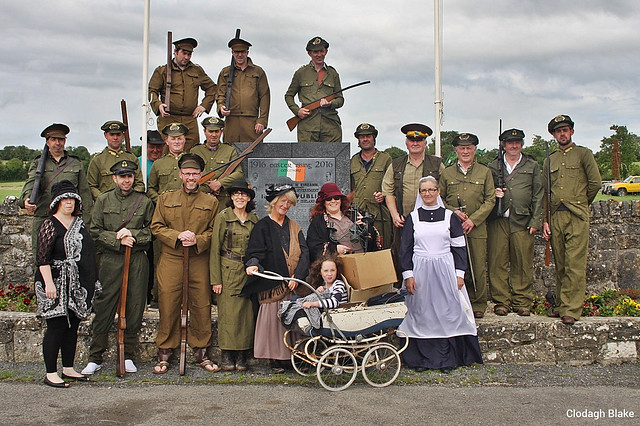 The ceremony commenced at 1pm and Matty Tynan gave a warm welcome to the large crowd that had gathered at the crossroads. The Schoolchildren were lead into the village by Clara Hinchey, Joss Whelan and Andy Cooney on pipes, with Robyn and Craig O’ Shea on Drums. Matty gave a description of the plaque, which consisted of three main components,the proclamation, the National Flag and the portraits of the sixteen leaders who were executed in 1916. The defence forces were represented by Richard Slattery and T.J. Ryan.

Following the drum roll Richard Slattery raised the tricolour and the musicians then played the National Anthem. The Fenian Flag was then raised by Denis Ryan. Both of these flags were raised at the GPO on the 24th April 1916. The tricolour was first flown in public by Thomas F. Meagher, who has Tipperary connections, in 1848.

The memorial was then unveiled by two school children, Evie Smyth and Luke Ryan. Father Jimmy O ‘Donnell blessed the memorial and the Flagpoles. The musicians again joined in with some lovely Irish airs. Sean Ryan then proceeded to read the proclamation and the passion in his voice was a true reflection of how Padraig Pearse would have read it in 1916. School Principle Mr. Hayes then addressed the crowd to explain how Moyglass School had produced their 2016 proclamation. The older schoolchildren then read their unique proclamation, which highlighted their wishes for a lasting peace, equality, care for the sick and homeless, the need to highlight the blight of drugs on our present day society, and they appealed for urgent actions to tackle these issues. Mr Michael Moroney was guest speaker, Michael is a native of Drangan and a member of the 3rd Brigade Old IRA committee. His knowledge of this period of Irish history and the subsequent struggles to gain freedom for our country was very evident from his expertly delivered oration. 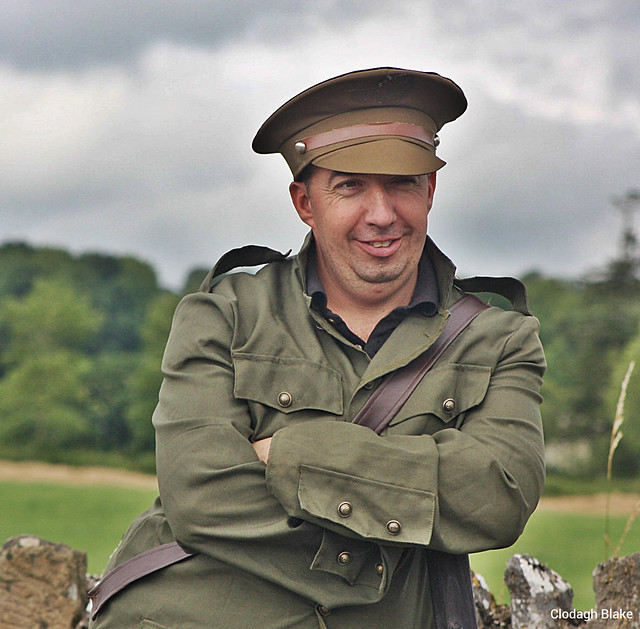 The ceremony was closed and the attendance were treated to refreshments in The Village Inn. Larry Kenny kindly captured the event on camera. A video was also made and can be viewed on nedkellyireland.com. The event was also covered by Tipperary County Matters for Irish TV.

The idea for the float was first proposed by committee member Ger Long and it was to capture the proclamation and the raising of the National Flags on the GPO. Following much discussion it was agreed that we should enhance this idea and produce a scaled model of the GPO.

We all knew that this was a huge undertaking that would need a large financial and voluntary labour input from committee members and others. The feeling was that we needed to properly honour the men, women and children who had made the ultimate sacrifice to secure our freedom. Sean Tynan produced a scaled drawing with minute detail of all the features, including the pillars to the front and the statues on top. 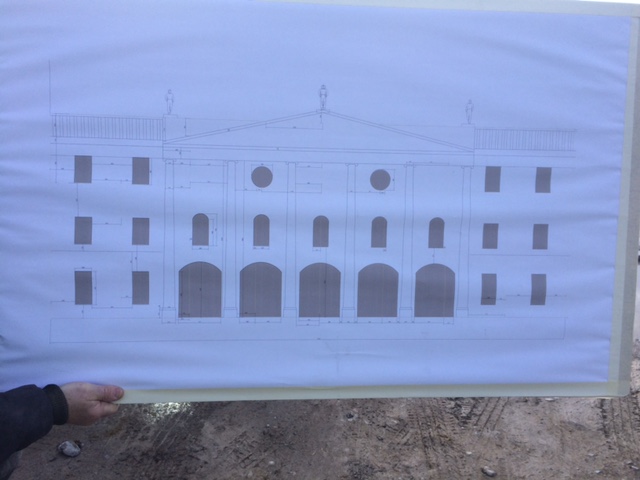 The volunteers worked for two weeks, day and night to produce what is truly a fitting tribute to our patriots. The attention to detail is truly remarkable and was greatly appreciated by the people of Moyglass when it was on show at the local community centre on its journey to Cashel. It took sixteen volunteers to load the structure on the trailer and keep in position while it was being secured. 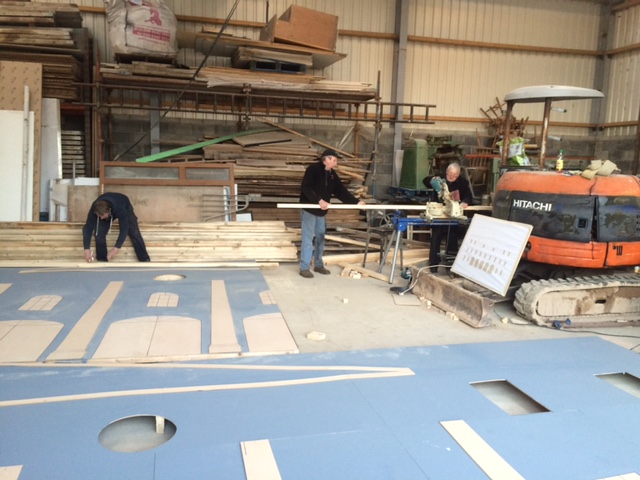 The core team of Benny Tynan, Mark Tynan, Seamus Barry, Lar Fanning and Charles Mc.Carthy were on hand to finally complete the project on St. Patrick.s morning. It was almost surreal to see the moving GPO and it really brought the rising to life in rural Ireland for the first time. 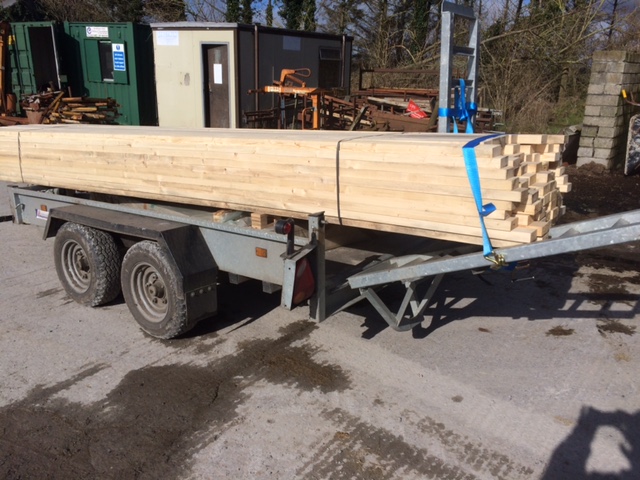 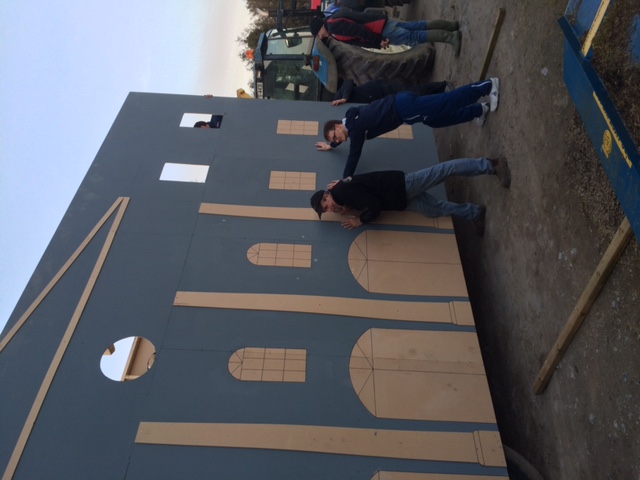 The float was surrounded by 30 locals from Moyglass, men, women and children and created the scene that would have been in Dublin in 1916. We had sound effects and lighting to portray the bombardment that the GPO suffered during the rising. The reaction of the spectators at the parade in Cashel was truly remarkable and they showed their appreciation by clapping us all through the historic town. Everyone involved in this tribute to our patriots got huge satisfaction from the spectators response and it was patently obvious that they understood the theme. The proclamation was read in front of the viewing stand to make sure that all present understood the historic importance of the declaration of independence by the 1916 leaders and to appreciate that it was a defining moment in irish history that shaped the future of our country. 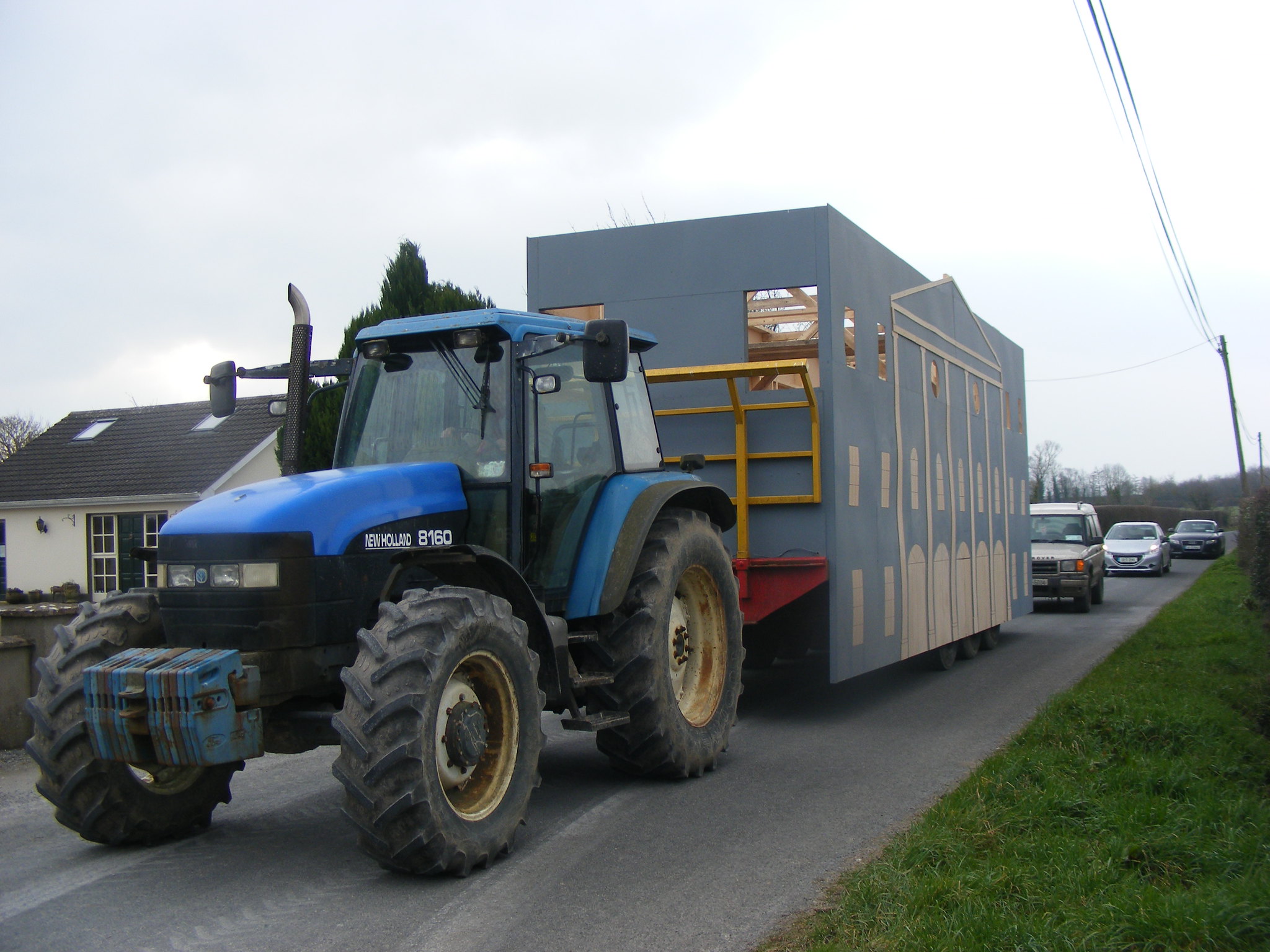 The Dualla show on sunday 28th of August will be its eight outing and is testimony to the manner in which it was constructed. The events visited so far are Cashel Parade, Clonmel army veterans celebrations at Railway station under the guidance of UNENVA, Fethard Festival, New Inn Festival, Killenaule Festival, Moyglass Vintage Day and Clonoulty Family Day. At this stage it is almost as well known as the real GPO and it has certainly raised awareness of 1916 throughout Tipperary.